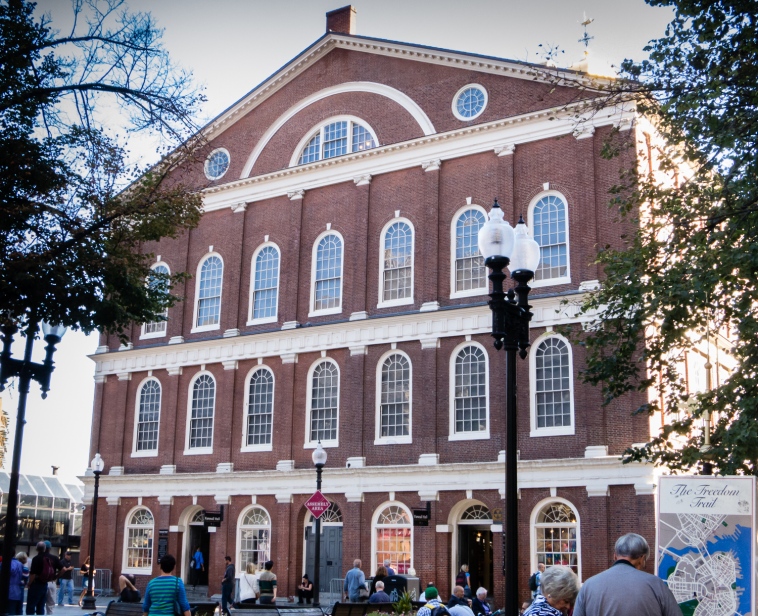 Faneuil Hall, “the Cradle of Liberty”, on The Freedom Trail, Boston, Massachusetts, USA

Often referred to as “the home of free speech” and “the Cradle of Liberty”, Faneuil Hall was one of America’s first public meeting venues. Built by wealthy merchant Peter Faneuil — who is buried in the Granary Burying Ground featured in Part 1 of our blog posts on The Freedom Trail — in 1741, this imposing structure is the place where the Sons of Liberty proclaimed their dissent against Royal oppression. Faneuil Hall has served as an open forum meeting hall and marketplace for more than 270 years and has continued to provide a forum for debate on the most consequential issues of the day. 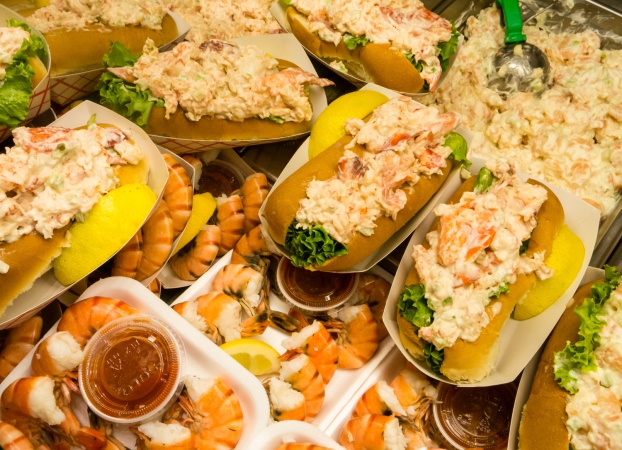 The first floor served as a marketplace for the local townspeople to sell their goods. Today, Boston National Historic Park operates the Faneuil Hall Visitor Center and the ground floor is filled with both locals and tourists shopping in the marketplace. 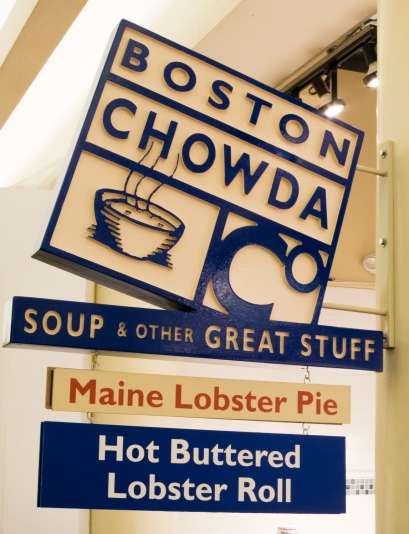 In addition to fresh Maine lobsters, lobster rolls and lobster bisque, shoppers can also purchase lobster mac and cheese pies — at the Boston Chowda stall in Faneuil Hall in Boston. 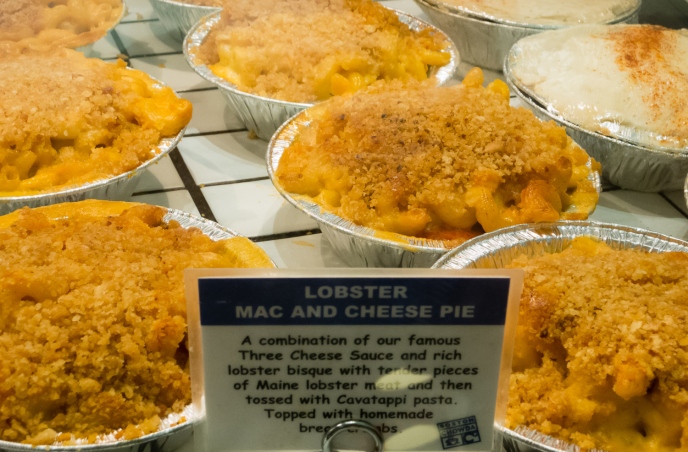 Built around 1680, the Paul Revere House is the oldest remaining structure in downtown Boston and the only home on the Freedom Trail.  Paul Revere purchased this former merchant’s dwelling in 1770, when he was 35 years old.  He and his family lived here when Revere made his famous messenger ride on the night of April 18-19, 1775. 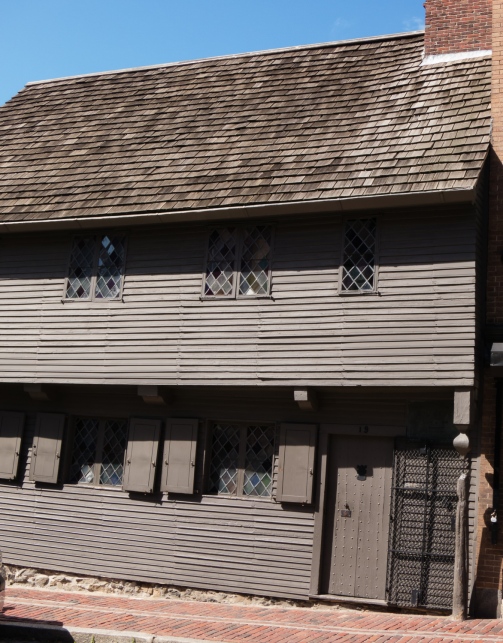 After serving as a rooming house and tenement for some of the thousands of Irish, Jewish and Italian immigrants who lived in the neighborhood, the building was restored in the early 20th century and opened to the public in April 1908.  Today the Paul Revere House serves as a museum and historic site where visitors can learn about Paul Revere’s life and times and experience what home life was like in 17th and 18th century Boston. 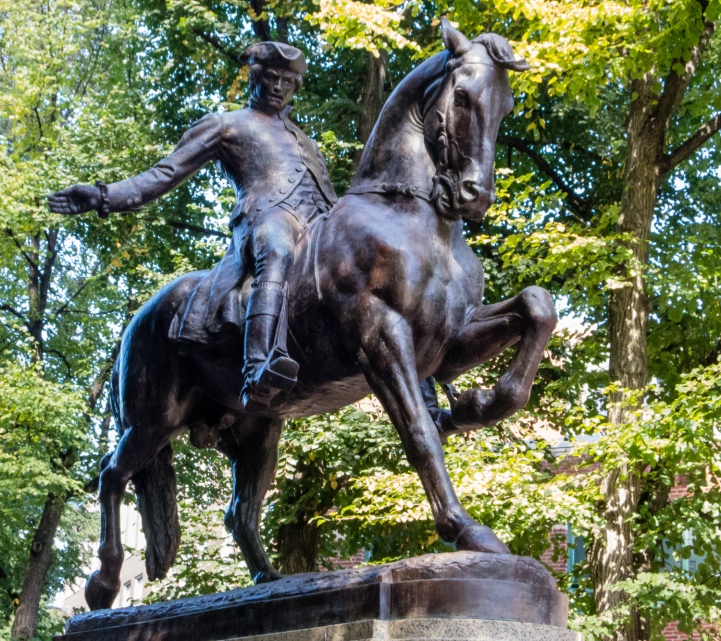 “Listen my children and you shall hear of the midnight ride of Paul Revere…”  With these words, poet Henry Wadsworth Longfellow immortalized the Old North Church and Paul Revere in American folklore. 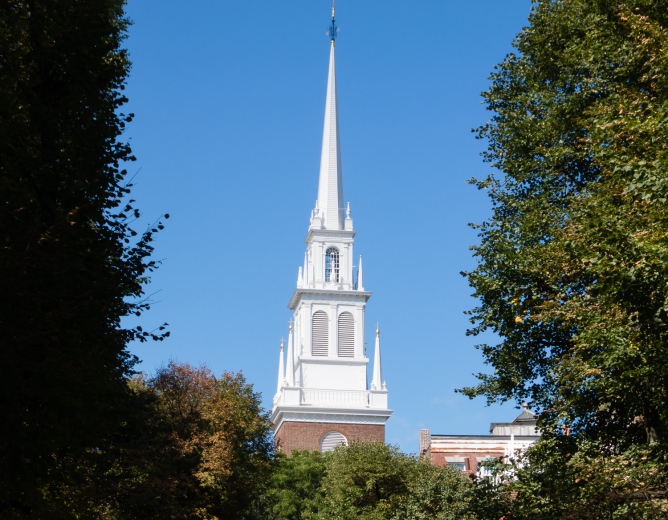 Visiting the oldest church building in the city of Boston gives one the opportunity to sit in the same box pews owned by colonial congregants.  It was from here that Paul Revere set out on his famous ride — “one if by land, and two if by sea” — on April 18, 1775, that ignited the American Revolution. 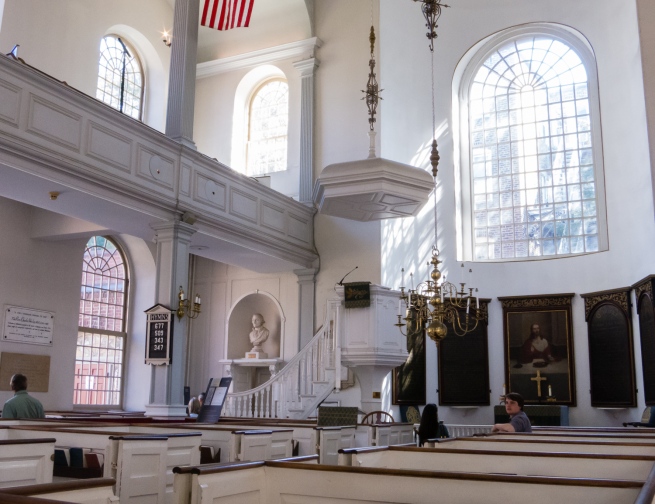 Interior of Old North Church, from which Paul Revere began his midnight ride to warn the citizenry of Boston on 18 April 1775, Boston, Massachusetts, USA

The Old North Church is still an active Episcopal congregation and one of the most visited historic sited in Boston. 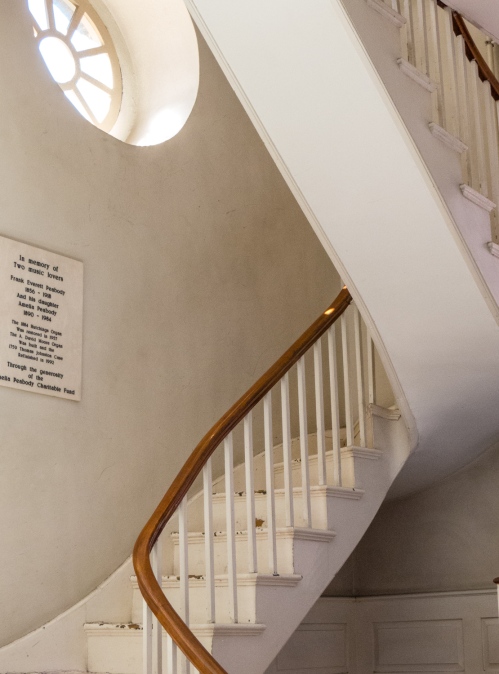 The Freedom Trail continues north through the city of Boston and across the Inner Harbor to include four last sites:  Copp’s Hill Burying Ground, USS Constitution “Old Ironsides”, USS Constitution Museum and Bunker Hill Monument — points that we missed due to time constraints.

The Freedom Trail passes directly by Boston’s Old City Hall which opened in 1865 and served as City Hall until 1969 when it was renovated for use as an office building (including, presently, a Ruth’s Chris Steak House restaurant).  At the time of the conversion — one of the first examples of adaptive use for an historic building — it heralded the beginning of this new concept.  The granite exterior was designed in the French Second Empire style characterized by ornamented columns, a mansard roof and a projecting central bay.  The murals at the building entrances illustrate the history of both the building and the site. 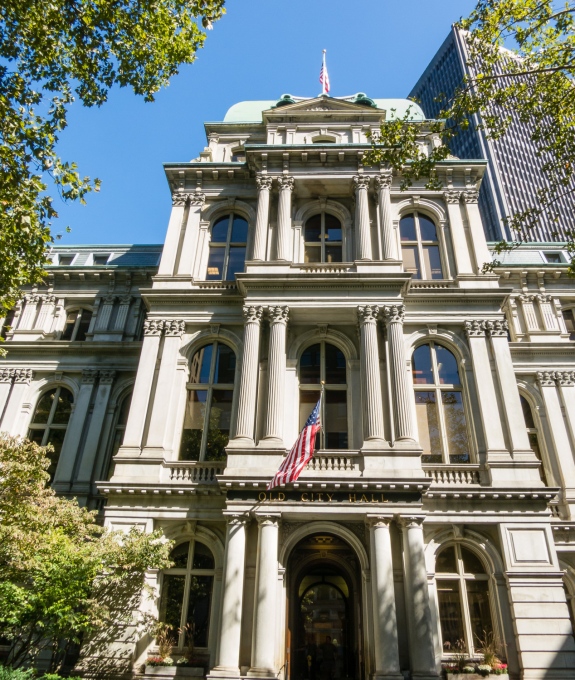 The site was the home of the Boston Latin School (1635), the nation’s first public school and the oldest educational institution in the country (originally for boys only…until 1972!).  It is fabled that on 19 April 1775, word of shots fired in Lexington circulated rapidly throughout Boston with, “Close your books, School’s done, and war’s begun!”  One of the school’s most famous student, Benjamin Franklin, is remembered on the site with a bronze statue.

As shown, below, the courtyard sculpture of Benjamin Franklin in front of the Old City Hall depicts Franklin dressed in the attire appropriate to his day; this is the first portrait statue in the United States depicting the subject as he would actually appear rather than draped in classical heroic attire. 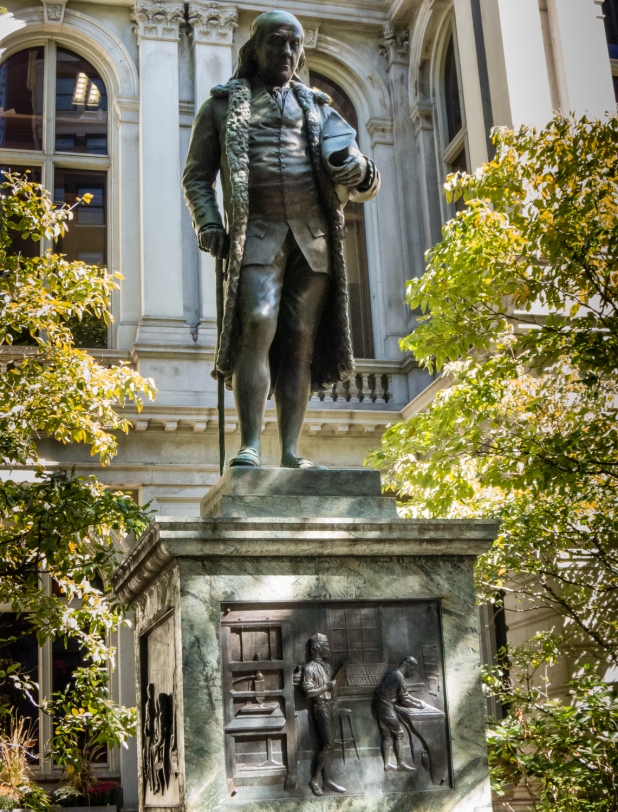 On the base of  Franklin’s portrait sculpture is a relief sculpture depicting the signing of the Declaration of American Independence on 4 July 1776, 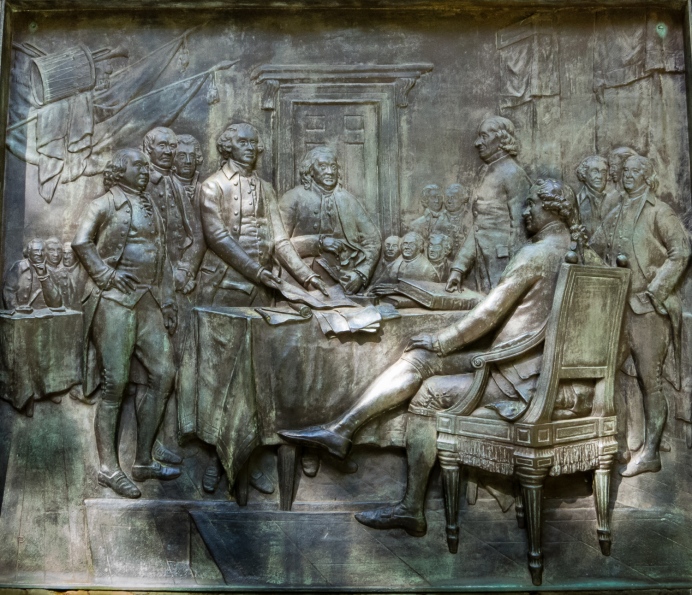 The front courtyard of the Old City Hall has two sculptures and a plaque which answers a question that many Americans don’t know the answer to:  what is the origin of the two mascots of the major American political parties — Democrats (Donkey) and Republicans (Elephant)?

“When, in 1828, Andrew Jackson established the Democratic party and ran for president using the popular slogan, “Let the people rule”, his opponents thought him silly and labeled him a “jackass”.  Jackson, however, picked up on their name calling and turned it to his advantage by using the donkey on his campaign posters.  Over the year this donkey has become the accepted symbol of the Democratic party. 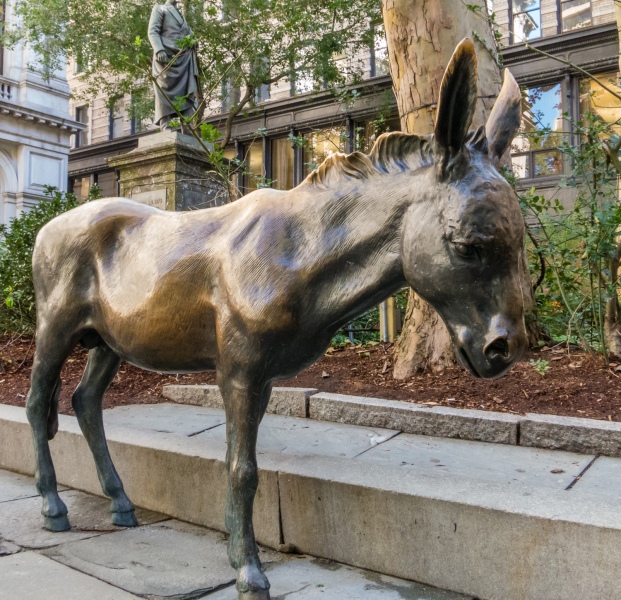 No tax on tea! This was the decision on 16 December 1773, when 5,000 angry colonists gathered at the Old South Meeting House to protest a tax… and started a revolution with the Boston Tea Party. Built in 1729 as a Puritan house of worship, the Old South Meeting House was the largest building in colonial Boston. From outraged protests over the Boston Massacre to the night when Samuel Adams gave the secret signal to throw 340 crates of tea into Boston Harbor, colonists assembled at Old South to challenge British rule. 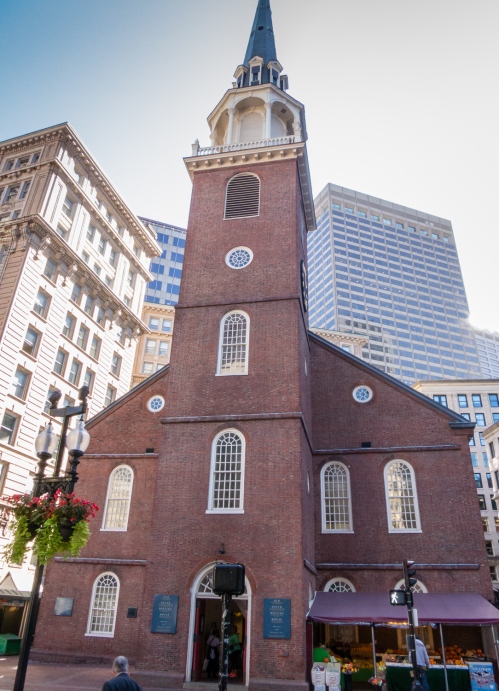 The Old State House, Boston’s oldest public building, was built in 1713 as the seat of British colonial government.  Here the Royal Governor and Massachusetts Assembly debated the Stamp Acts and the Writs of Assistance.  The Declaration of Independence was first read to Bostonians from the east balcony on 18 July 1776.  The building served as the State House until 1798, and was also Boston’s City Hall from 1830 to 1841. 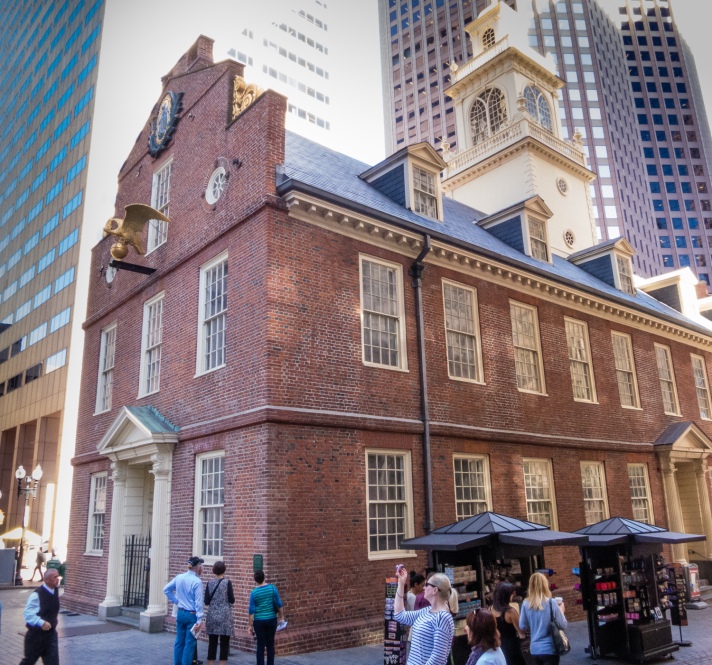 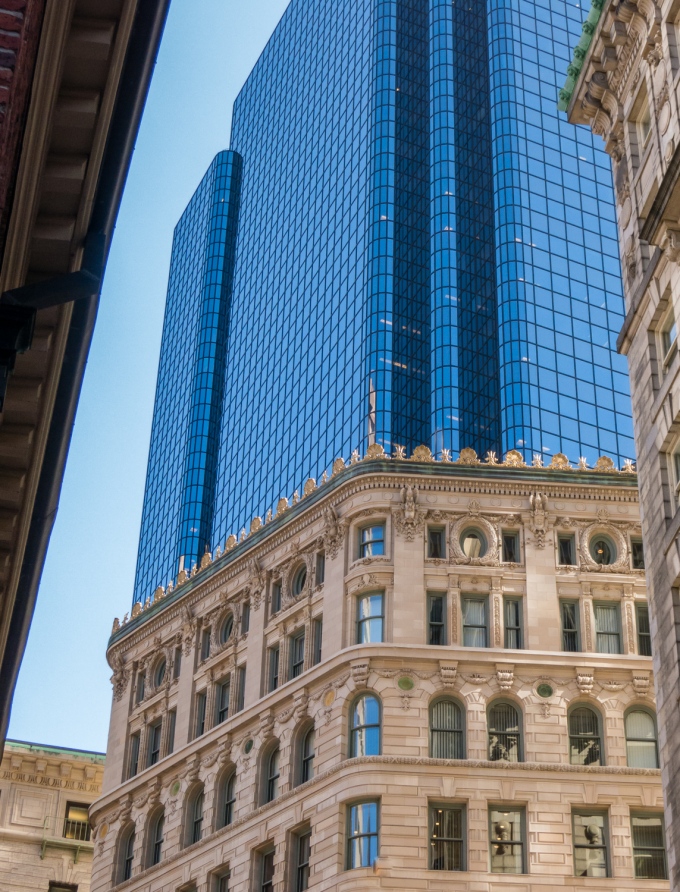 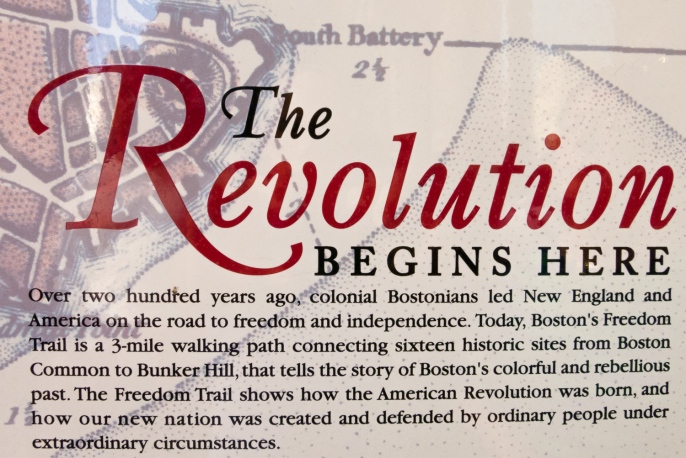 “The Freedom Trail [a registered trademark!] is a one-of-a-kind American experience”, according to the 2015 Official Brochure produced by the Freedom Trail Foundation.  “Close to 60 years ago the CIty of Boston recognized that a cluster of buildings and locations in the downtown area were so historically significant that they had to preserve them for generations to come.  These 16 sites are The Freedom Trail — the backbone of the American Revolutionary story. ” [Additional information may be found at:  http://www.TheFreedomTrail.org]

The first stop on the Freedom Trail is Boston Common, adjacent to Boston’s Public Garden (see our previous blog post).  The Boston Common is America’s oldest public park, having begun as a “common” grazing ground for sheep and cattle.  The local citizenry was assessed for the purchase of 44 acres of open land, held in common by the people and used as a pasture, dating back to the City’s founding in 1630.

The photograph below is the Massachusetts State House, designed by Charles Bulfinch (a famous colonial architect).  This “new” State House was completed on January 11, 1798.  The original wooden dome was later overlaid with copper by Paul Revere;  not until 1874 was it covered with 23-karat gold leaf (as shown). 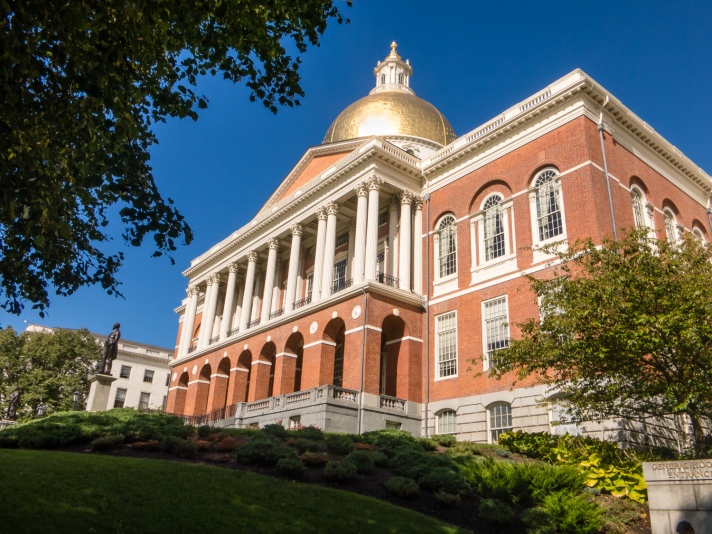 The land for the State House was originally used as John Hancock’s cow pasture (he later was president of Congress and the first signer in 1776, in large flamboyant characters, of the United States Declaration of Independence — a large signature so that England’s King George could read it without his spectacles).  Note that it is under the golden dome that the senators, state representatives and the governor conduct the daily business of the Commonwealth of Massachusetts. 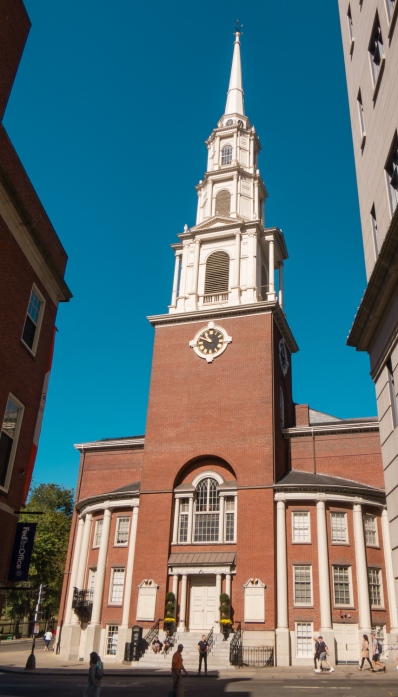 The 217-foot steeple of the Park Street Church was once the first landmark that travelers saw when approaching Boston.  Its lofty architecture, designed by Peter Banner, reflects the lofty mission of human rights and social justice.  Prison reform began in this church, women’s suffrage was strongly supported here, and some of the first and most impassioned protests against slavery were delivered inside.  The church was founded in 1809.  The site of the Park Street Church is known as “Brimstone Corner”, perhaps because the church building once housed brimstone (a component of gun powder) in its basement during the War of 1812.  Or maybe it’s because old-school ministers delivered many a “hell-fire and brimstone” sermons here.

“America (My Country ‘Tis of Thee)”, by Samuel Francis Smith, was first sung at Park Street Church on July 4, 1831.

Many important organizations were founded here, including the National Association for the Advancement of Colored People (NAACP) and the Animal Rescue League of Boston. 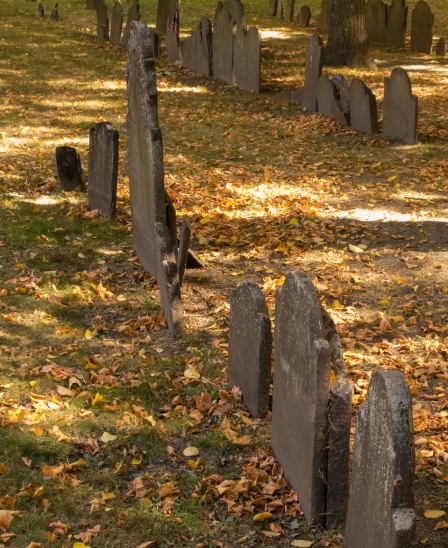 Some of America’s most notable citizens rest in the Granary Burying Ground.  An elaborately embellished obelisk marks the site of john Hancock’s tomb.  Benjamin Franklin’s parents, along with Revolutionary heroes such as Paul Revere (see below), Samuel Adams, James Otis, all five of the Boston Massacre victims, and Peter Faneuil are also buried here. 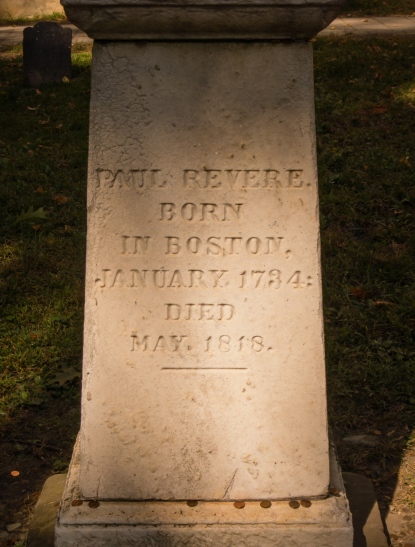 King’s Chapel, founded in 1688, was the first non-Puritan church in the colonies and became the first Unitarian Church in America.  It houses the oldest American pulpit in continuous use.  By 1749 the congregation outgrew its original wooden building and hired Peter Harrison, America’s first architect, to build the current structure.  Construction began that year and was completed in 1754.  It was the first dressed stone building constructed in the colonies, made of granite quarried in Quincy, MA. 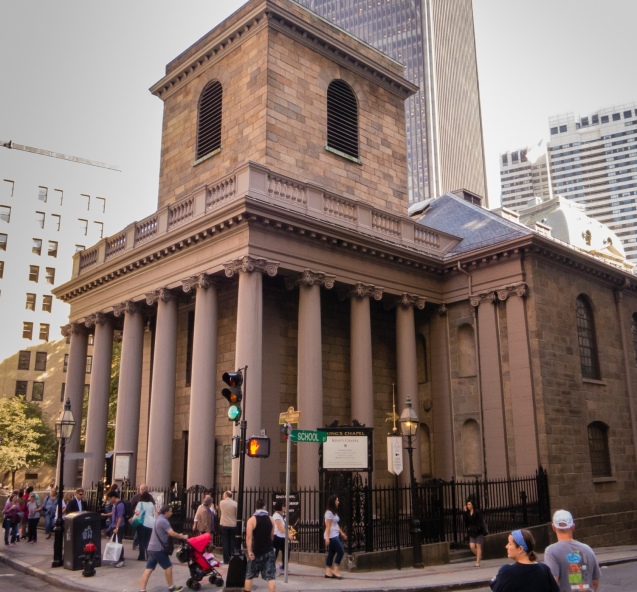 The magnificent interior is considered the finest example of Georgian church architecture in North America.  Paul Revere crafted the King’s Chapel’s 2,347 pound (1,065 kilograms) bell in 1816, and he proclaimed it the “sweetest sounding” he had ever created. 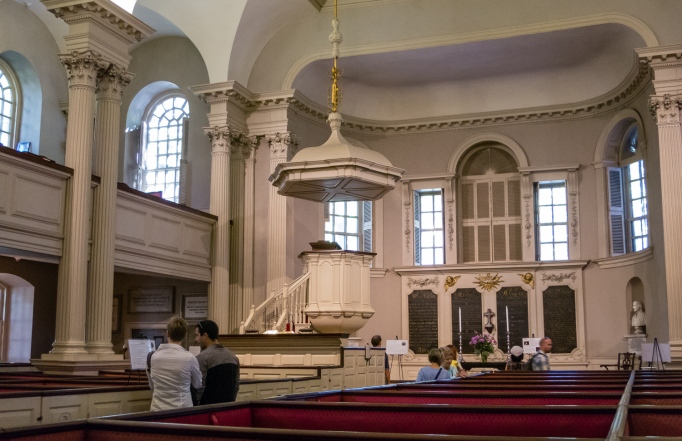 Today, King’s Chapel looks very much as it did when it opened over 260 years ago. 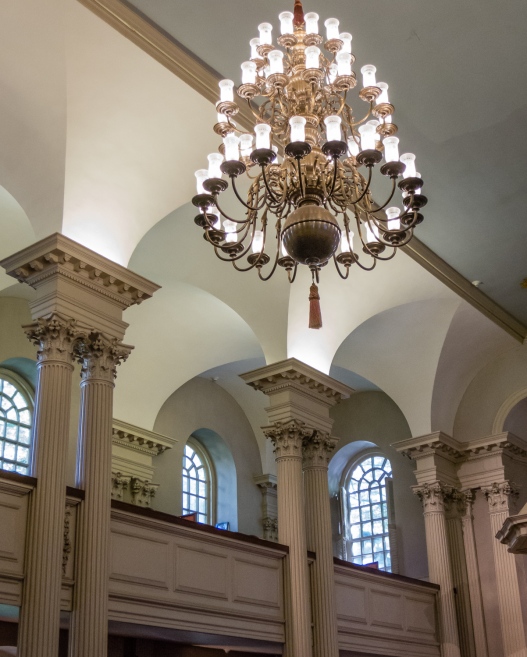 Detail of the interior, King’s Chapel, on The Freedom Trail, Boston, Massachusetts, USA

Adjacent to the Chapel, King’s Chapel Burying Ground was Boston proper’s only burying place for nearly 30 years. John Winthrop, Massachusetts’ first governor, and Mary Chilton, the first woman to step off the Mayflower, are buried here. 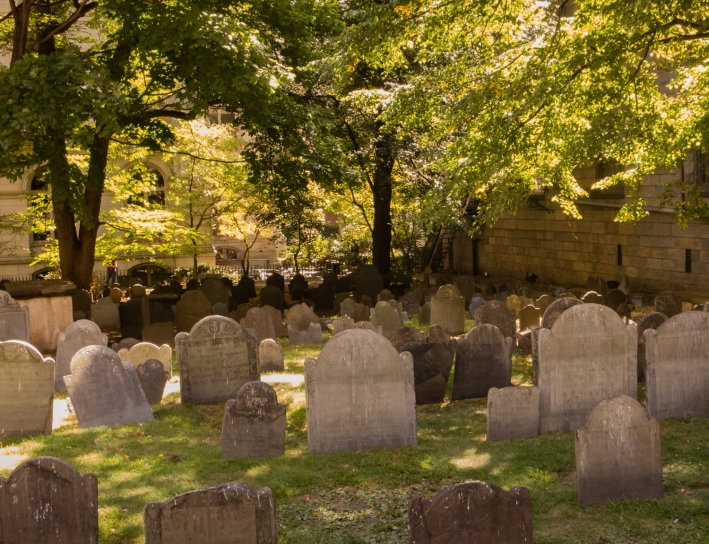 Our walk along The Freedom Trail will be continued in our next two blog posts. 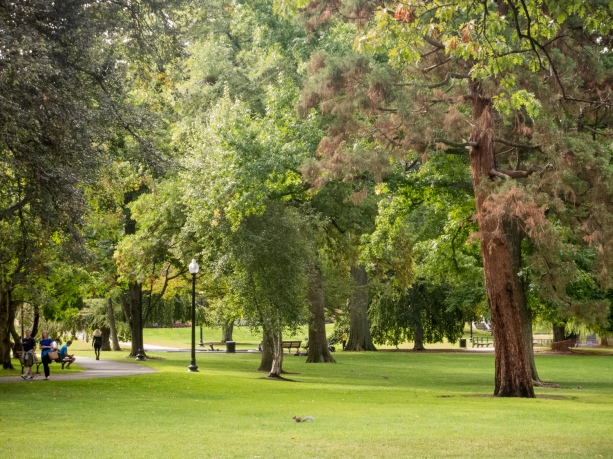 The Boston Public Garden has a variety of flora and is centrally located in Boston, Massachusetts, USA

With four grandchildren four and under, there was no way we could head off to the Boston Freedom Trail to immerse ourselves in early American history and architecture and luminary leaders without first stopping by the Public Garden, founded in 1837.  It is centrally located in downtown Boston, adjacent to the well known Back Bay and Beacon Hill neighborhoods, adjacent to the intersection of Charles and Beacon Streets, and just west of the Boston Common (see our next blog post). 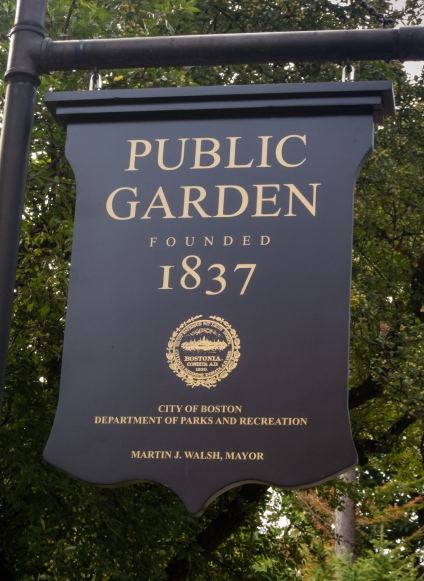 So, why would our grandchildren be interested in THIS garden?  In addition to the well known swan boats on the pond in the garden, our grandchildren know about  the Public Garden through Robert McCloskey’s wonderful illustrated book, Make Way for Ducklings, set in the garden. The duckling sculpture, pictured below, was created by Nancy Schon in 1987, based on the book.  The inscription by the ducks reads:  “This sculpture has been placed here as a tribute to ROBERT MCCLOSKEY whose story Make Way for Ducklings has made the Boston Public Garden familiar to children throughout the world; 1987.” 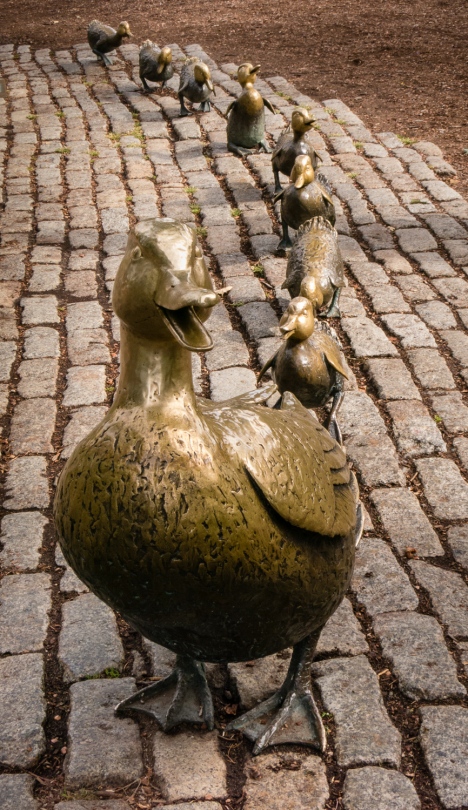 The Garden and the adjacent Boston Common are bordered by some beautiful residential buildings. 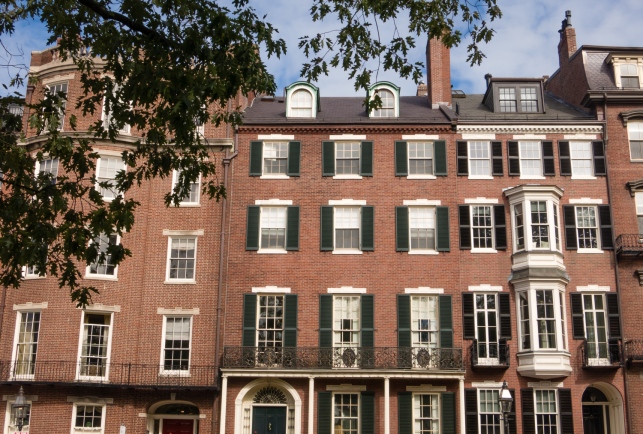 Before setting off on The Freedom Trail, which originates in Boston Common, we had a chance to view the sculpture below, illustrating the founding of the city in 1630 (old by American standards, but certainly recent history compared with Egypt, China, Greece, Italy, and Mesopotamia, for example). 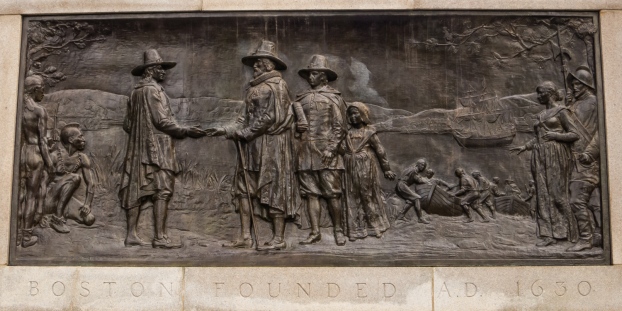 [A note to our readers:  CLICK on any photograph in any blog post and it will be displayed in a larger size;  expand the borders of your browser window to enlarge the window and enable the photograph to be displayed at full size.]