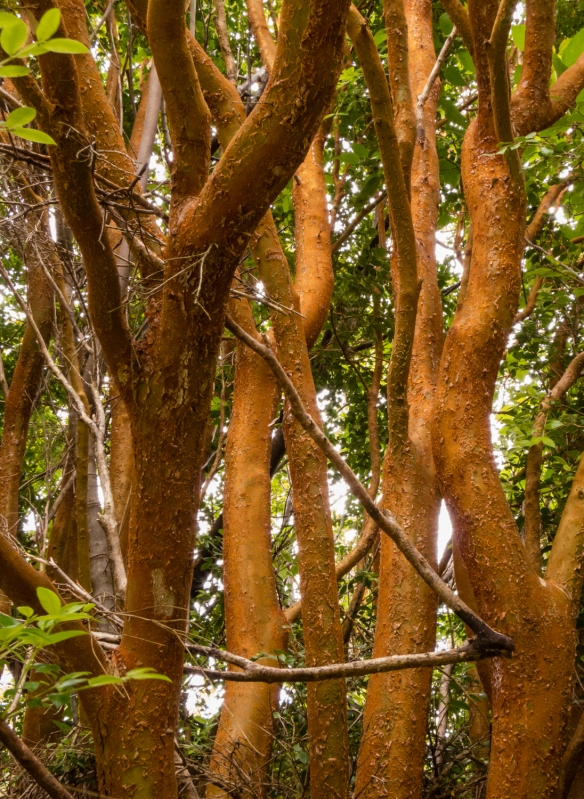 The Arrayán tree, commonly known as Chilean myrtle, is native to the Andes and was found throughout Parque Aiken del Sur, Puerto Chacabuco, Patagonia, Chile

Parque Aiken del Sur (Aiken del Sur National Park), a privately owned 618-acre (250-hectare) nature preserve and botanical garden, is a short 15-minute drive from the port of Puerto Chacabuco, Chile in the Chilean Patagonia region.  The park has several hiking trails, including the nature trail to Lago Riesco (Riesco Lake), which we walked with a local nature guide.

The Arrayán tree, commonly known as Chilean myrtle (Latin: luma apiculata) is native to the Andes and was found throughout Parque Aiken del Sur on our nature hike.  “Its trunk appears twisted and contorted and has smooth bark, coloured grey to bright orange-brown, which peels as the tree grows. Its fruit is appreciated in Chile and Argentina and its flowers are important for honey production. The Chilean myrtle has medicinal uses for the [local native] Mapuche people.” — Wikipedia

After falling through the rabbit hole, “Alice” was dwarfed by the local ferns in Parque Aiken del Sur, Puerto Chacabuco, Patagonia, Chile

The waterfall (Barba del Viejo cascade) was one of the visual highlights on our nature hike in Parque Aiken del Sur, Puerto Chacabuco, Patagonia, Chile 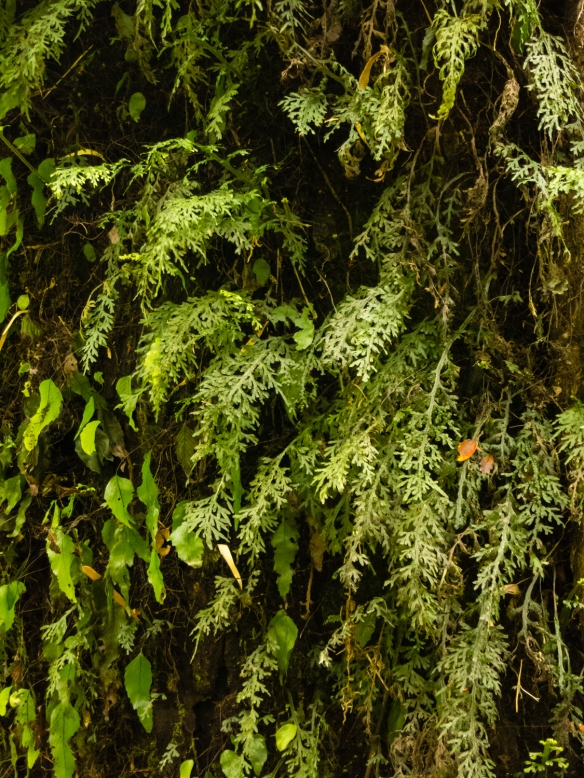 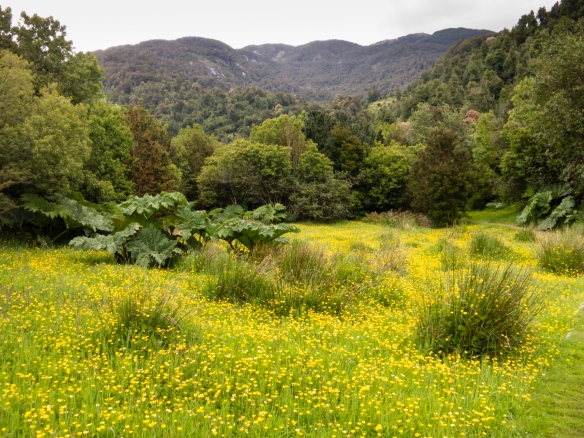 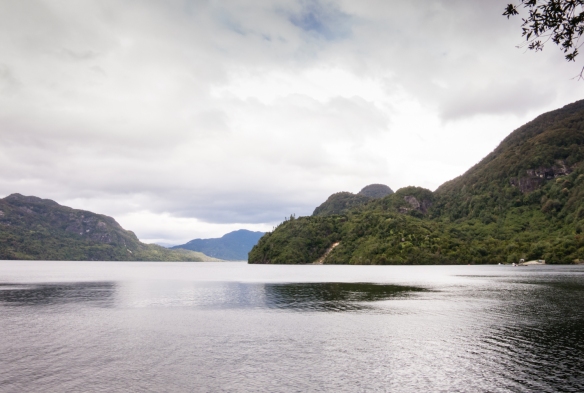 Returning to the ship before it departed Puerto Chacabuco proved to be the most harrowing experience we had in all of 2015 (and we had some good adventures!). Our guide had arranged for our driver to meet us at Lago Riesco (Riesco Lake) at 4:15 p.m. in order to drive back to the port for us to catch a tender before that service stopped at 5:15 (the all-aboard time was 5:30 p.m.).  The appointed time came and went and after a few minutes, our guide found that there was no cell phone signal at the lake. I successfully broke into the lodge/dinging hall on the hill overlooking Lago Riesco and, excitedly, found a short wave (CB) radio. Much to our chagrin, the battery it was connected to was dead and the electricity to the building had been turned off and we couldn’t find the main switch. Getting more nervous about being stranded in Puerto Chacabuco with only the clothes on our back, no passports, hardly any money, and knowing the ship would be traversing the Patagonian fjords for four days before arriving at the next port (Ushuaia, Argentina), we decided to start the hour-plus long hike back to the park headquarters and visitor center.

As we descended the hill toward the trail, it was with a huge sigh of relief that we saw two local policemen – whom our guide knew. They informed her that the gate on the road up to the lodge/dining hall/Riesco Lake had been locked closed and our car and driver were sitting (on the other side) there for over an hour. We jumped in the car and had a really fast drive through the park on dirt roads (nearly breaking an axle) and then sped down the highway back to the port. A ship’s tender had waited shore-side in case we showed up at the last minute – what a welcome sight! We boarded the ship at 5:29, greatly relieved that we had narrowly avoided the unwelcome adventure of spending four unscheduled days ashore with no cell phone, passport, money, or spare clothing – and no plans/reservations to get from Chile to Argentina. Later we did find out that the ship would have ferried our passports ashore and left them with the port agent so that we’d at least have our IDs and the ability to travel to meet up with the ship at the next port.

Needless to say, we were thrilled with the views as we sailed through the fjords of Patagonia that evening, knowing we almost got to spend an unplanned extra four days ashore…

Sailing through the fjords of Patagonia — here, the Fiordo Aisen — after departing Puerto Chacabuco, Patagonia, Chile

“Where the Andes tumble into the sea” is an apt description for Puerto Chacabuco and Puerto Aysén, remote outposts at the head of Chile’s Fiordo Aisén (Aysén Fjord). Back-dropped by snow-capped peaks, these small towns are the gateways to several nearby national parks. 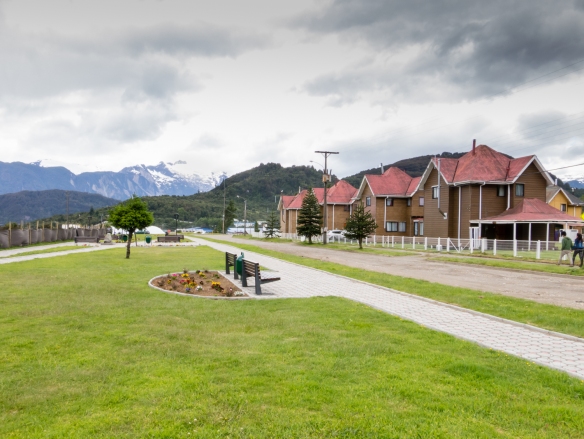 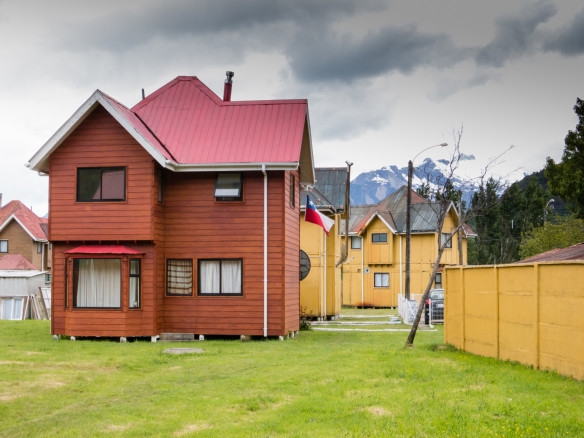 A new home in the development overlooking the harbor, Puerto Chacabuco, Patagonia, Chile

Puerto Chacabuco’s population is only 1,400 and the main economic activity is its harbor – built after the old port, further upriver in Puerto Aysén, was lost due to a natural disaster. For shopping, locals and visitors alike head to Puerto Aysén, 9 miles (14 km) away, or the regional capital Coyhaique, 48 miles (77 km) to the east. 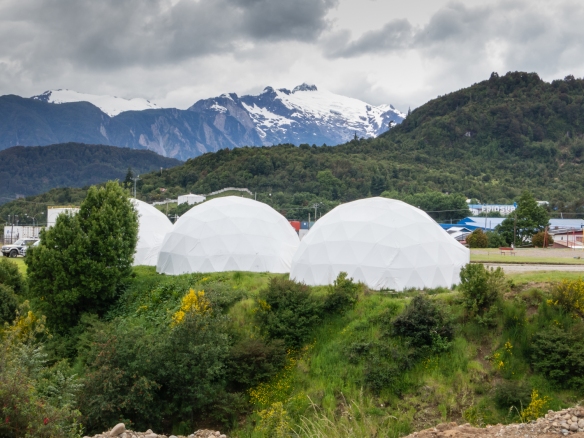 Puerto Aysén is a popular embarkation point for venturing into Chile’s numerous national parks in Patagonia. Reflective of the environment, fishing and salmon farming are the area’s main economic drivers. Chile’s largest suspension bridge – President Ibanez Bridge – crosses Rio Aisén (Aysén River). It spans 689 feet (210 meters) and was named a national monument over a decade ago. 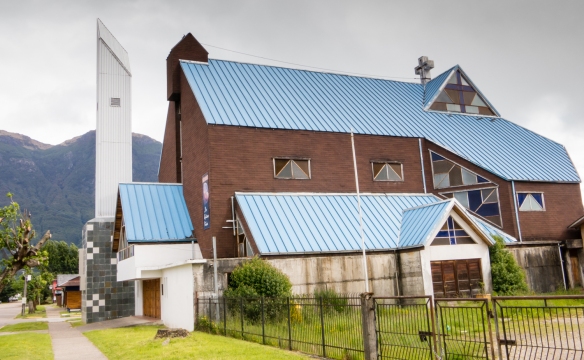 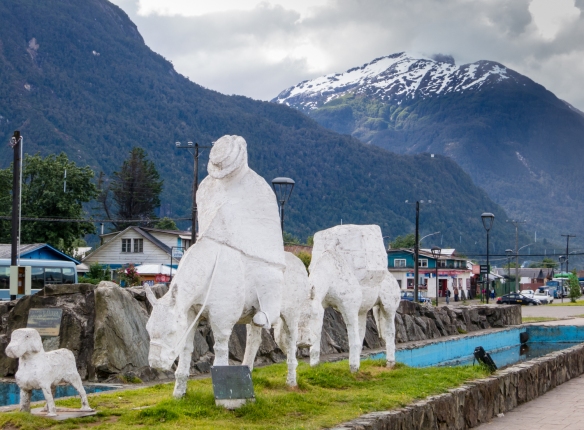 Monument to the early settlers in the center of town, Puerto Aysén, Patagonia, Chile 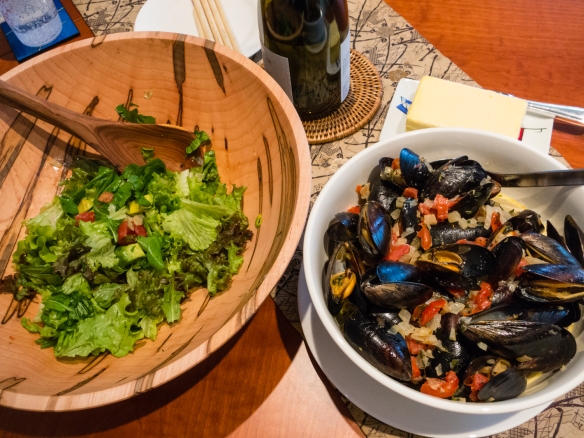 Using ingredients purchased in Patagonia, our lunch in our apartment on the ship was fresh local Chiloé Island mussels in a tomato Meunière sauce with a fresh salad, anchored at Puerto Chacabuco, Chile

With a hankering for some pasta, although not local, our dinner in our apartment began with linguine with Italian porcini mushroom and truffles sauce, anchored at Puerto Chacabuco, Chile 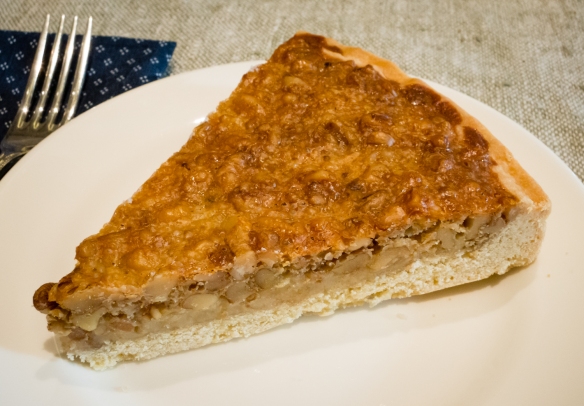 We’re still arguing over which of these awesome desserts was the best.  Luckily, they both looked so good at the bakery we bought one of each so we could have the argument!

Our dinner in our apartment happily ended with shared desserts from the leading bakery in Puerto Chacabuco — here the dulce de leche cake; anchored at Puerto Chacabuco, Chile