No, we didn’t leave Auckland and suddenly arrive in Tuscany (although it looks that way) – these are olive trees on Waiheke Island, New Zealand, belonging to the initial olive oil producer there, Rangihoua Estate

Located one-half hour from Auckland by ferry, the “Wine Island” of Waiheke is far removed from the city’s bustling urban ambiance.  Rolling hills, abundant sunshine and the sea breeze off the Hauraki Gulf combine to create ideal growing conditions for grapes and olive trees.  An abundance of wineries produce a range of intensely flavored varietals, from elegant, floral syrahs and deeply colored Cabernet Sauvignons to refreshing Sauvignon Blancs and Viogniers.  We anchored off the Maitiatia Wharf on Matiatia Bay on the far western end of the island.

We spent a day exploring several of the island’s wine and olive oil producers.  Our initial stop was at the first olive oil producer on Waiheke, Rangihoua Estate. Rangihoua manages 4,200 olive trees and produces internationally acclaimed extra virgin olive oil.  Our visit included a tour of the olive groves, presentations about harvesting and olive oil production techniques, and an olive oil tasting to appreciate their range of freshly produced EVOO (extra virgin olive oils).  Rangihoua took home gold and silver awards at the Royal Easter Show 2016, and was named in the Flos Olei 2017 guide book of the world’s best olive oils.  We liked the Waiheke Blend EVOO so much we bought some to bring back to our apartment’s kitchen on the ship

An Italian-made olive oil press which is at the heart of the production of excellent EVOO (extra virgin olive oil) at Rangihoua Estate, Waiheke Island, New Zealand 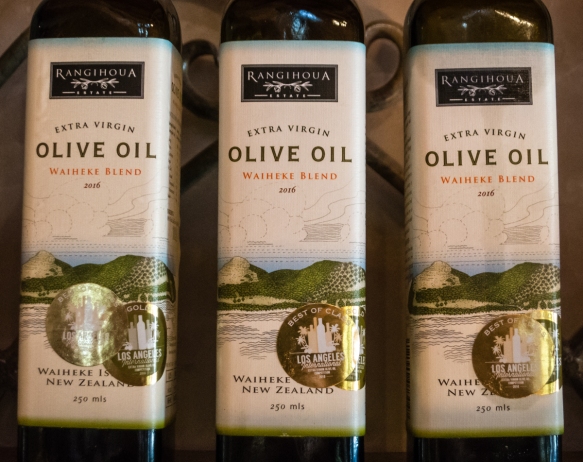 We liked the Waiheke Blend EVOO so much we bought some to bring back to our apartment’s kitchen on the ship, Rangihoua Estate, Waiheke Island, New Zealand

Vineyards at Stonyridge Vineyards where the first vines were planted in 1982 and 1983, among some of the first on Waiheke Island, New Zealand

Our next stop was a tour and wasting with the winemaker at Stonyridge Vineyards.  Well-known for its Bordeaux-style cabernet blends, Stonyridge Vineyards has employed traditional French winemaking methods since its very first harvest in 1985.  Two years later, they drew international appeal with their top-rated Larose.  The on-site Veranda Café serves appetizers, salads, entrées and desserts accompanied by Stonyridge varietals 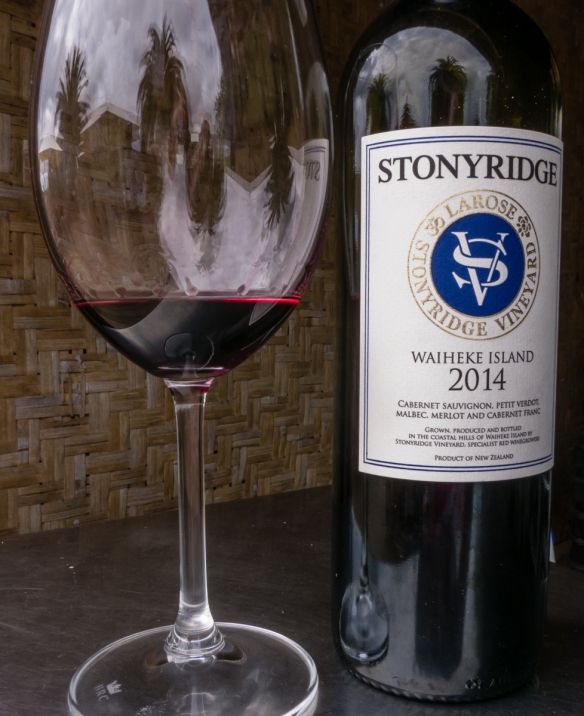 The award winning Stonyridge Vineyards Larose was the best Bordeaux-style red wine we tasted on this trip around New Zealand – its price, now about US$300 for the current release (2014), reflects the wine’s ratings at the top of the country’s red wines, Waiheke Island, New Zealand

Our final stop was at Te Whau Vineyard and their restaurant where we had a delicious lunch accompanied by several of their wines.  A recipient of Wine Spectator’s Award of Excellence as “One of the Best Restaurants in the World for Wine Lovers,” Te Whau specializes in fresh New Zealand and Pacific Rim cuisine.  Located on the top level of the Te Whau winery, this award winning restaurant features first-rate New Zealand labels, a collection of contemporary wines to accompany meals and spectacular views of Hitapa Bay.